Blind Dates and Networking Are Part of Life
Back to Blog >

Just like death and taxes, blind dates and networking are part of life. Since you can’t avoid networking or meeting new people, you need a plan. So I’m sharing some great networking strategies that I developed while enduring some unusual, cringe-worthy, sweet, fun, and downright bizarre blind dates.

Networking and blind dates evoke similar physical feelings: dread, nausea, sweaty palms, and the desire to be absolutely ANYWHERE ELSE.

You’re going to have to endure blind dates and networking over and over again in life. Ironically, this is especially true if you’re married.

When you’re single, you think, “Someday I’ll meet the right person and I won’t ever have to do this again.”

Meeting the spouse of your spouse’s new best friend or co-worker is exactly like going on a blind date.

Of course with networking, you are usually the person who decides to go but you probably dread it. Even if you know everyone who will be there.

Sometimes ESPECIALLY if you know everyone who will be there.

So take it from a highly experienced, former dater, give yourself something to live for. Make a deal with yourself that you will:

That last one was my mantra on those dates when I was sitting across from someone like the guy who told me he lost his virginity to Yasser Arafat’s sister, or the one who checked his phone while I was telling him what I did for a living, or the one who brought me a can of coffee (he was afraid I might be allergic to flowers).

One hour or one drink. I repeated it over and over again.

That didn’t mean I could chug my glass of cabernet and bolt.

I had to drink like a normal person and try to make it last for 59 more minutes. So technically it was one hour AND one drink. I also learned early on, that alcohol was key for this to work for me. I was perfectly okay with my date drinking something non-alcoholic, but no first dates in places where they only served coffee.

If you’re not an alcohol drinker this will still work for you. Coffee or tea are actually more effective – after all, you can’t shoot piping, hot coffee. 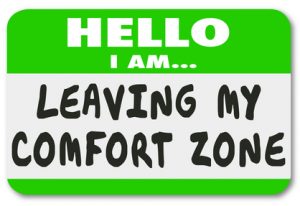 The point is if you don’t make it a rule to sit in your own discomfort for just a little while you might miss out on some great stories and GREAT people.

Because guess what? There were great first dates too! I met an advertising exec who told me about working with Morgan Freeman and Bruce Willis on commercials in Japan, an engineer who developed a new pacemaker after his dad died of a heart attack, and a corporate compliance officer who I ended up dating for three years. I learned if I didn’t stick around for at least an hour and ask questions, I might miss out.

Going on a zillion first dates taught me a lot about focusing less on my nerves and more on getting to know something interesting about the person sitting across from me.

So the next time you dread walking into a luncheon, happy hour or even morning networking meeting where you know no one or everyone in the room, try it. Ask questions about things that are not related to work.

Try one of these and I swear you’ll have fun:

How did you end up living here?

What kind of stuff do you do on Saturdays?

What were you famous for in elementary school?

If you could be an Olympic athlete, what would be your sport?

One hour, one drink, so many possibilities.

If you are struggling to find a new way to introduce yourself and your business, let’s talk!

You are so much more than what you get paid to do. Sharing the events, people and places that make you who you are today will make you memorable and someone people want to have a second drink with! There are ways to share those “Wow” or “Yikes” events in your life in a professional setting. Call me and you too can be the, “Most Exciting Networker in the World”!